We all are usually impatiently awaiting for Nollywood movies premieres which take place in Lagos or Abuja. Indeed, if there is one thing that Nollywood actors and actresses have integrated like their Hollywood counterparts, it is the importance of their appearance during these events.

For the premiere of the film Sugar Rush, I can’t wait for it to be announced on a platform available here in Europe (Netflix if you read us …), the Hollywood actors and actresses did not disapoint. The looks were perfect , my preference going mostly to actresses rather than actors (who remained a little stiff).

Toke Makinwa, Tony Ze Body and all the others were sublime. But the one that caught my attention was my little sunshine Jemima Osunde. I fell for her makeUP.

Jemima Osunde for Sugar Rush the premiere: The LOOK

A simple hairstyle, two long plaits, with slight blue extensions, to avoid the too nice look.A superbly colored sequined dress to meet the theme of the evening, and a makeup that I found sublime.

I was therefore inspired by her makeup, which I wanted to wear for Christmas Eve.

Mine is less glittery for sure, nevertheless it remains bold enough to still be the perfect evening look.

I took this as an opportunity to finally use the products of the Makeup Revolution X Patricia Bright collaboration.In the video below the makeup tutorial and my images of the look. 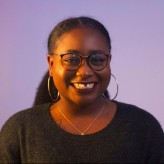