Weither it relates to clothes, to shoes or to accessories, fashion is an endless loop. That is why, in 2018 you can very well wear your mom’s clothes without it shocks anyone in the street.

This is also true as regards hairstyles. Since a few years, we see the return of the African traditional plaits and it is not to displease us the Club of Cotonettes.

When I was a child, I had a holy horror of african threading hairsyles for a single reason: I did not like how my mother used to style me. My mother did not know how to braid either did not take time to make it or did not like making it. I admit that I do not know too much but I am sure of a thing the session of hairstyle always ended in tears.

” Why these tears? “ Would you ask me. Except the fact that the detangling was a torture, I simply loathed of perpetual hairstyle she made me. We were really far from the complex and elaborate plans. She separated my hair in four portions which she braided in the thread in long and thick antennas (my frizzy 4C hair were long and voluminous) whose ends were gathered at the very top of my head. Et voilà! I found myself with a kind of Eiffel Tower which was worth to me the worst mockeries at the school throughout the week.

All this contributed to make me dream of the day when I can finally have relaxed hair. All that I wanted was to be finally able to shake my relaxed and curly free hair in the wind or make a well pulled and smooth ponytail. It is necessary to say that my models were the girls on the packaging of softeners Just For Me and my aunts who did hair with curling iron, curlers, weavings and wigs. Give up traditional hairstyles meant making as the adults who surrounded me. The African traditional hairstyles, recently the Fulani plaits with or without beads, are trendy again since a few years now. When I fell on some photos of the series “Chroma” of the photographer Medina Dugger, serial in homage to J.D. Okhai Ojeikere, I had at first a flash of sour memories because of my real-life experience concerning african threading hairstyles.

Then, I reconsidered things with my adult’s eyes who likes the kinky hair which is a part of my identity. The series “Chroma” celebrates the beauty of the traditional hairstyles with a lot of creativity and pétillance. Medina Dugger plays with vibrating colors, beads, extensions and cowries, for a result which contrasts with Black and White J.D Okhai Ojeikere’s series.

Because I think that the kinky hair is beautiful and that it deserves to be represented as high as its beauty and its versatility, I wanted to share with you a part of this series which you can also find on its website www.medinadugger.com. 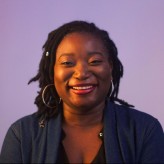